In this project I had to make my own bass line, this was kind of fun because I made mine so weird but cool at the same time. I kind of like it but it is really awkward. I just threw down some notes and I went off of that. It was quite simple and all I did was throw down notes so that saved time. I didn’t go for a specific sound. My bass line is awkward because it has sharps and flats which makes it sound weird. I really like it though! 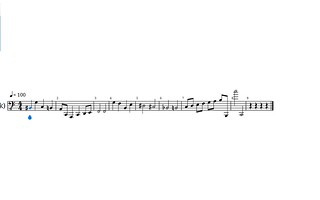 Screenshot of my Bass Line

Bass is the youngest type of music.  Organs can go super low.  The Bass line can go down or up and the tune can go the opposite way.  This sounds very good to the ear.  You can steal songs from hundreds of years ago because there was no copyright law back then.

Sometimes two bass solos come together.  The synthesizer is the only keyboard that can get super low notes, these notes were found on the bass guitar.  That is pretty low.

What I learned and problems I solved

In this project I had to make a bass line that had a good sound to it. Mine sounds kind of awkward and really creepy. The Bass goes very high at some points and super low at others. I was going for an ominous sound.

During this class I have learned about myself and how I like to make ominous and mysterious melodies, harmonies, Rhythms, etc. I never knew this and I am kind of glad I found this out. I kind of am, not a lot though because it is still creepy.

I thought that helped the remix a lot.  I got that idea from Hannah and I thought that was very smart.  It really helps the remix to come alive.  This project has really taught me about music and how complex it is.  It is a great project and I had the most fun on it out of all of the other projects!

I showed Creativity and Innovation when I was brain storming.  I had goals for this project and at first I thought they were to big of goals.  I thought there was no chance of me making a remix or a song or anything I could call mine that was actually good.  When Mr Le Duc said if you imagine something in your head then you can accomplish that.  I had no idea that I would make what I have made.

I am very proud of it. Another way I showed Creativity and Innovation was I came up with a new style of music.  I have never heard the kind of music I have made.  I replaced the beat with scratching the record.

Personally I have never heard any music like that and I think I might be on to something.  I am probably not but that shows creativity.  Not to mention I went into this project never using this program! 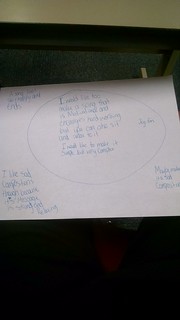 Brainstorm that I made before doing this project on flickr.com

I showed Communication and Collaboration when I asked Hannah over and over to listen to my composition.  This probably annoyed her but I had to! She really helped me and we talked a lot about our compositions.

We talked a lot during this project. Hannah even said that we worked a lot together even though we weren’t on the same team.  We were both independent. Her exact quote was “Ya we worked a lot”.

Giggling as she said this because she realizes that we worked together like the whole time.  I thought that was funny since we were both working independently on our projects.

I used VirtualDJ 8 which is extremely difficult using if you have never used it in your life.  I used this program and made my own composition. I am also showing Media Literacy by publishing content on the blog you’re reading right now.  I am publishing content daily of my experience.

This all by itself shows I know how to use programs correctly and utilize them in an appropriate way.

I have also used Flickr.com, Sound Cloud, VirtualDJ 8, and more. You can check out my flickr account by just clicking on the brainstorm picture above!

I showed adaptability when I used a program I have never used before in my life.  The only thing I knew how to do on this program was drag a song and drop it to have it ready to remix and master.

That is literally all I knew how to do and that was from just reading drag song here.  I played for about an hour with the program.  My goal after an hour was up was to know how to use VirtualDj and have a basic idea of how the program works.

As you can see in the screenshot below all I had was the song and the rest was just nonsense to me.  I started playing around with the record and realized I could spin it to make it scratch.

I found out that this sounds really cool and I started replacing the beat with scratching the disc.

I also showed flexibility when I gave feedback to Hannah for her work and she actually used it which I thought was really cool.

Another way I show adaptability is when some people had to hook up a system to my computer so I couldn’t use it and I moved computers to help.  Scott Le Duc mentioned this and how I was very adaptable and flexible in the situation. 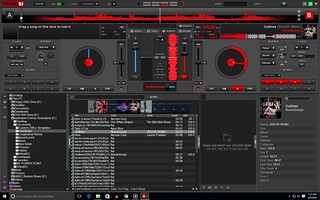 As you can see in the screenshot above, I knew nothing. I was playing with controls that I didn’t know.  For example I had no idea what gain was.  I watched some YouTube videos about it and found out what it does and that really helped the remix to come alive I think.

A Day In My Life

This is Hannah’s blog and you should check it out. This is one of the best projects she has done and I highly advise you to go check her out!

Reactions to the Final Version

I had my partner Hannah do a reaction on my composition and she really liked it.  She said how it was very well put together.  When she was done listening to it I could see in her eyes that she was kind of like dang nice job.

I appreciated her reacting on it multiple times and giving me feedback.  We both did this for each other and I think we did a good job of giving each other good feed back.  She really liked my composition and I thought that was very cool!

Evaluation of the Final Version

I love this remix and I have listened to it probably 20 times at least! I like it cause it is mine and I made it but also because I think it has a great beat/scratching.

The maker of the original remix is very talented and I couldn’t have made this remix without him.  I love this remix and I think it is very good and that people could actually enjoy it!  I am really happy with it and proud of it!  This class has really helped me to get in the art of music and help me with music.

What I learned and problems I solved

You take the songs beats and then you can change the volume, you can overlap songs and you play with the beats of the song and that is how you get your remix.  I found out after 30 minutes which sucks but I found out and I am glad now I know.

I learned that there are many components to making music and making music sound good.  I found that very cool cause I never knew that and now I do.

Music is very complex and I am just getting started.  Another problem I had was actually the program itself.  I had no idea how to use the program and that was a big problem for me.  After watching tutorials I got a sense.  I only watched a couple tutorials and some didn’t really help me at all.

There were only one or two that really helped me.  I really had to find stuff out and I did which makes me even more proud of my composition. This program is difficult to use but once you get the hang of it you can really make quality stuff with it.

It is a great program and it is great for beginners.  You just have to play around and experiment with it!

In this project I had to make a rhythm which gave a hook to the listener. Basically a Riff that had a bass. I decided to add the base and make it an electric guitar. I think that the bass line really carries along the melody and keeps it going.

Without it, well it didn’t sound to good. It was very weird and awkward. When I added the bass it really brought the ominous part of the melody out and gave life to it. 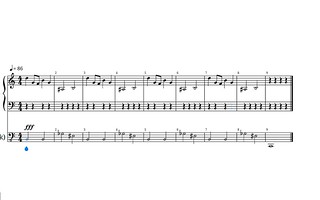 This is a screenshot of my beat or Rhythm Riff that I created.  The Rhythm Riff is above the screenshot.  The screenshot shows what notes I used.  The very bottom line or bass line is an electric guitar and the treble clef or the top notes are a piano.

The beat or PULSE in a piece of music is the regular rhythmic pattern. Like the beating of your heart; heartbeat.

The SPEED at which a piece of music is to be played.

The STRESS given to a musical note.

The period of TIME during which a musical note is HELD OUT.

A specific rhythm determined by the NUMBER of beats AND the TIME VALUE assigned to each note.

The musical rhythms in a piece of music that accents a normally WEAK BEAT (off-beat/up-beat).

When the meter of a piece of music consists of TWO BEATS per measure/bar.

When the meter of a piece of music consists of THREE BEATS per measure/bar.

When the meter of a piece of music consists of FOUR BEATS per measure/bar.

A gradual increase of tempo in a section of music.

A gradual decrease of tempo in a section of music.

A flexible tempo in a section of music.

What I learned and Problems I solved

One problem I had was the bass line/electric guitar.  I had to find out which note went with the flat and equaled it out but at the same time make the piece ominous.  I found that out after trial and error.

That is one thing I love about composing, you have to just try stuff without knowing.  That is what I did and I thought I found a great note combination!  That was a big problem for me but I did find a combination.  I learned on this project that you have to just let the music take you.

What I mean is don’t go for a specific sound.  Puke notes out and try them.  The notes on the treble clef were just put on there by me.  I did nothing with them before and I just threw them on there and saw how it worked out.

They sounded great and I really didn’t mean to put them there. I just threw them on there randomly.  I found that weird and very interesting!

Babies have Rhythm in the womb from the mom’s heart beat. The beat is the foundation of the song. There is a tempo in your brain and you can not help help it. Cross Rhythm was and is very famous. There is always a tempo in your brain and if you hear something off then you will notice it. Everyone has it and everyone wants the beat to be correct or it could possibly annoy them.